Eventually, Hindus followed the impulse that had appeared among the Sumerians: they wrote poetic stories that focused on the power of the gods. These stories were written to create ideals for people to follow. The better known of these are poems called the Ramayana and the Mahabharata.

Ramayana translates as the Story of Rama. It is believed to have been written by a Brahmin named Valmiki, a man whose style of poetry was new and a style to be copied thereafter. It is said to have appeared between 400 and 200 BCE. The story takes place centuries earlier, when Aryans were expanding their influence over Dravidians in southern India, the Aryans engaging in missionary endeavors supported by military power and a strategy of divide and conquer. In its seven books and 24,000 verses the Ramayana praises the heroism and virtues of Aryan warrior-princes: the Kshatriyas. The Ramayana has as its main hero a prince called Rama, whose life the Ramayanadescribes from birth to death. Rama and his brothers are depicted as embodying the ideals of Aryan culture: men of loyalty and honor, faithful and dutiful sons, affectionate brothers and loving husbands, men who speak the truth, who are stern, who persevere but are ready and willing to make sacrifices for the sake of virtue against the evils of greed, lust and deceit. 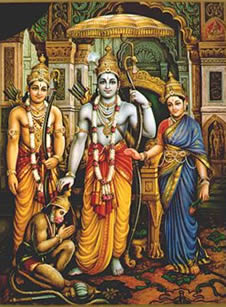 The Mahabharata, meaning Great India, is said to have been written by a Brahmin named Vyasa, between 400 and 100 BCE, but no one really knows. Across centuries, priestly writers and editors with different attitudes in different centuries were to add to the work, and the Mahabharata emerged three times its original size. The Mahabharata was divided into eighteen books of verses interspersed with passages of prose. It attempted to describe the period in which Aryan tribes in northern India were uniting into kingdoms and when these petty kingdoms were fighting to create empire. The work attempted to be an encyclopedia about points of morality. One of its heroes is Krishna, described as a royal personage descended from the gods – an eighth incarnation of the god Vishnu. The Mahabharata’s heroes are described as yearning for power but, like the heroes of the Ramayana, devoted to truth and having a strong sense of duty and affection for their parents.

New contributions to the Mahabharata gave greater focus to the gods Vishnu and Shiva. A story incorporated into the Mahabharata became known as theBhagavad Gita (the Lord’s Song), shortened by many to the Gita. TheBhagavad Gita became Hinduism’s most popular scripture and into modern times it would be read by many for daily reference – a work that Mahatma Gandhi would describe as an infallible guide to conduct. In the Bhagavad Gita, Vishnu acquired a new incarnation: Krishna. Krishna was originally a non-Aryan god in northwestern India. In the old Mahabharata he was a secondary hero, a god who had appeared in human form. In the Bhagavad Gita, Krishna became the Supreme Deity in human form.

The Gita is an account of the origins, course and aftermath of a great war between royalty. In it a dialogue takes place between a prince, Arjuna, and the charioteer alongside him as the two ride into battle at the head of Arjuna’s army. The charioteer is Krishna in disguise. Arjuna sees that his opponents ahead of him are his relatives. He drops his bow and announces that he will not give the signal to begin the battle. He asks whether power is so important that he should fight his own kinsmen, and he states that the pain of killing his kinsmen would be too much for him, that it would be better for him to die than to kill just for power and its glory. Krishna is like the god of war of former times: Indira. Krishna gives Arjuna a formula for accepting deaths in war, a Hindu version close to the claim that those who die in battle will go to paradise. He tells Arjuna that bodies are not really people, that people are souls and that when the body is killed the soul lives on, that the soul is never born and never dies. According to Krishna, if one dies in battle he goes to heaven, or if he conquers he enjoys the earth. So, according to Krishna, one should go into battle with “a firm resolve.” Attitude was of the utmost importance. “Let not the fruits of action be thy motive, nor be thy attachment to inaction.”

Krishna reminds Arjuna that he is a warrior and that to turn from battle is to reject his karma, in other words his duty or place in life. He makes the irrefutable argument, an argument that leaves no room for questioning one’s own intentionality: that Arjuna should make war because it is his destiny to do so. He states that it is best to fulfill one’s destiny with detachment because detachment leads to liberation and allows one to see the irrelevance of one’s own work. To give weight to his argument, Krishna reveals to Arjuna that he is not just his charioteer, not just another military man who talks like he is divine but that he is the god Krishna – a claim that Arjuna accepts. Some readers of the Bhagavad Gita interpret this to mean that Arjuna does not need to step from his chariot to find God and that humanity does not need to search for the divine: that God is with a person and for a person.

Arjuna expresses his support for family values, and he is a defender of tradition. He complains of lawlessness corrupting women, and when women are corrupted, he says, a mixing of caste ensues.

Krishna became the most loved of the Hindu gods, a god viewed as a teacher, a personal god much like Yahweh, a god who not only believes in war but a god of love who gives those who worshiped him a gift of grace. A loving god could be found here and there in the old Vedic hymns of the Aryans, but this new focus on a loving god and the satisfaction it brought to the people of India was a challenge to Hindu priests, for it offered salvation without the need for ritual sacrifices. In the Bhagavad Gita (1:41), Krishna says: “Give me your heart. Love me and worship me always. Bow to me only, and you will find me. This I promise.”

According to Krishna, as expressed in the Gita (2:37), one could accumulate possessions and not lose blessedness so long as one remained indifferent about success and failure. One can attain salvation so long as one restrains one’s passions in whatever one does. One should be fearless, steadfast generous and patient. One should be compassionate toward other creatures. One should be without greed, hypocrisy, arrogance, overweening pride, wrath or harshness in speech. And one should “study the Holy Word, austerities and uprightness.” (16:1-2)

The Gita (2.22) describes the soul as shedding a worn-out body like an old worn-out garment and putting on a new body as one would a new garment. The soul is immortal and the body is subject to birth and death. The Gita extends the metaphor to reincarnation, to Karma as described in the Upanishads. Where a soul went depended upon how well a person had behaved in his previous life. Good actions in the former life led to a soul to take on a new higher form of life. The soul of the doer of evil led a soul to take the body of a lower form of life. Hinduism epic literature described what was good behavior, and in a new work, the Laws of Manu, defined more clearly what was bad.